Before introducing Sola, Simon drew attention to the Vision Fund with Gift Days coming up on 23 and 30 April, and a week of 24-7 prayer between those dates. Simon also challenged us to fill up the front rows in church and be closer to the preacher!


Sola’s prayer is that we might no longer see generosity in black & white, but in technicolour. To change our perspective.


READ: Genesis 18:1-8. Abraham shows spirit led generosity to 3 strangers. He gave them a feast even though he was unprepared and unready. Though Abraham didn’t actually eat with them. It was about emptying himself on behalf of others. Those 3 strangers were angels.


Sola shared a story of needing money for flights to Nigeria. He felt prompted to write on facebook ‘praying for a flight, prices are crazy’. A lady responded with £1000 to cover the flight. Soon after, she herself received £600 – and said she wouldn’t be surprised if the rest came back to her. Another £100 came in. Then a week later, her tax bill was a full £1000 less than she expected.


Message is that God is good. We can give and trust in faith. We cannot outgive God.


READ: Genesis 19:1-4. Lot knew that just inviting wasn’t enough, he urged them to come. Because of that dinner, Lot got the information for him and his family to be safe.


Sola spoke of not giving something cheap, the minimum, but of giving a feast.


Sola shared another story of when he stood in response to a preachers call for people in financial need to stand up. Shortly afterwards a young man knocked on his door with a cheque for £1000!


READ: John 4:10 from The Message Jesus answered, “If you knew the generosity of God and who I am, you would be asking me for a drink, and I would give you fresh, living water.”


QUESTION: How does the generosity of God, who gave His only son, challenge me to rethink my own generosity?


Sola shared a story of visiting Madrid, looking for a church one Sunday morning. Having arrived by taxi, as a stranger, he felt prompted to bring some prophetic words. Then he was invited to share fellowship and a meal at a home – he was then given money to cover the taxi, and return train fare. Only in the kingdom of God could it happen to end up in the home of a stranger, sharing fellowship, and helping out in the kitchen to prepare food.


QUESTION: Do you have any stories of giving or receiving generosity which you could share with the group?

READ: Luke 22:7-13. The ‘man’ that Jesus told them to follow, culturally shouldn’t have been carrying a jar at all! God provides the practical needs (a room), and God sees all things before they happen.


QUESTION: Are people led to find their practical needs met if they follow me? It depends on how much I am being led by listening to God’s whispers. I may not know the impact or consequence.


Sola shared a story of getting 100 dollars out of a cash machine. A woman behind him wasn’t able to get out any cash, and Sola felt prompted to give her whatever she asked for. It was 50 dollars. He doesn’t know the impact, but challenged us to just obey the prompting of the Holy Spirit.


If you want the Holy Spirit to help your own spirit of generosity, then ask for that help. To be the one in tune with the God’s whisper and therefore the one worth following.


QUESTION: Would you spend a few minutes in quietness seeking the help of the Holy Spirit in being generous?
Posted by ajswift at 09:15 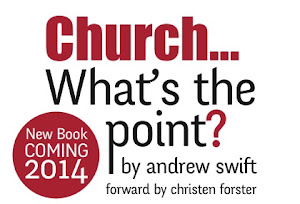 ajswift
Andrew Swift, is 30 somthing years old and lives in Maidenhead, Berkshire with his wife and three children. He is Company Secretary of Share Jesus International and Chair of Christian Surfers UK For the past 15 years or so, Andrew has worked in the field of procurement and business development. Between 2003 - 2009 he was a Global Business Development and Procurement Director for an international telecommunications firm. As well as pursuing his own business (in his spare time), he now works for a global media company.